So, You’re Thinking of Becoming A Freelancer… 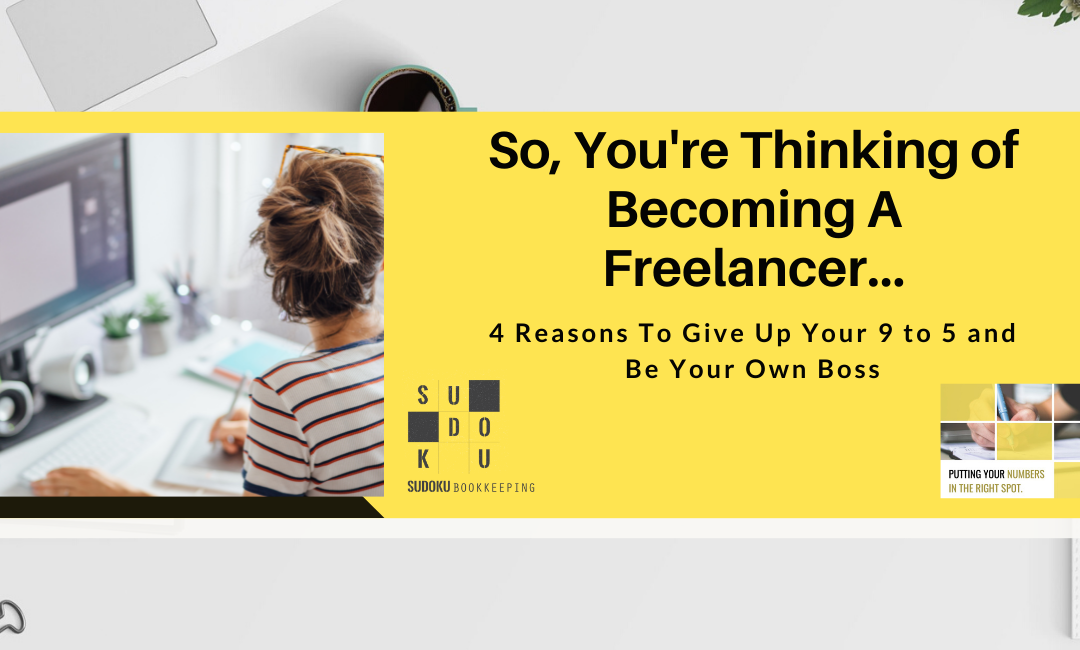 So, You’re Thinking of Becoming A Freelancer…

Freelancing has traditionally been associated with the creative trades. Many graphic designers, copywriters, editors, and artisans have been their own bosses for decades.

However, over the last few years, there has been an uptick in other industries getting in on the game.

Thanks to mobile technology, almost any job can be done remotely, as proven in 2020 when most of the world shut down, and many began to work from home.

Therefore, it shouldn’t come as a surprise that more accountants and bookkeepers are taking the plunge and becoming sole traders, serving their clients from the comfort of their own homes.

Freelancing isn’t a new subject for this site. In our previous article, we spoke of the difficulties of working for yourself. While I still believe in everything in that article, I wouldn’t change it for the world because the positives outweigh the negatives.

Clearly, I’m not alone in this thinking since there are an estimated 1.1 billion freelancers worldwide. That equates to approximately 35% of the world’s working population.

Even better- statistics show that Australian freelancers are the third-highest paid in the world.

There Are Many Advantages to Both Freelancing and Hiring a Freelancer

In this article, we will be exploring some of the aspects that show just why it’s one of the fastest-growing employment avenues, not only in Australia but in the world.

So, why would you even consider giving up your nine to five?

1.Choosing Your Own Hours

Freelancing isn’t an easy gig. The old adage “Time is Money” applies to independent contractors more than almost any other industry. Freelancers work many hours– often more than the average office worker- however, you’ll be working the hours that work for you.

As a freelancer, you also have the opportunity for a better work/life balance. It’s easy to get bogged down and bite off more than you can chew, but if you’re organised, you can do it all. No more commuting, no traffic, no toxic and distracting office-mates- you’re able to focus on the work and still have time to grab a coffee with a friend.

Parents, in particular, find that being able to work around children’s schedules is an appealing aspect. Being able to do the school run, activities, bedtime, or just spend time with your kids or grandchildren is one of the greatest benefits of being your own boss.

Creatives often find that the creativity only hits at night and struggle to work in a working environment where traditional hours are expected, so freelancing allows the freedom they need to focus when it suits them.

Personally, I love the freedom of working from home and still being able to look after my grandchildren- time I cherish and would not have if I wasn’t my own boss.

2. Choosing Who You Want to Work With

We’ve all had those nightmare clients handed to us that add unneeded pressure. The beauty of being your own boss is that you have the option to choose your clients.

Some freelancers also like the security of working with multiple businesses. A nine to fiver is usually in trouble if the company shuts down or has a financial crisis.

3. Companies Have Seen The Future- And It’s Freelance

Upwork reported that 94% of hiring managers hired freelancers during the COVID crisis. As mentioned above, last year’s shift to working from home proved to business owners not only that remote working works and is beneficial but that hiring independent contractors means a substantial saving on staffing costs.

Freelancers can also get started within a week- onboarding new staff can take at least a month, if not more.

Studies also show that people who work from home are 13% more productive, these numbers are set to climb. The demand for freelancers is growing.

Traditionally, as a salary earner, your increases don’t tend to align with how much the company is bringing in. Instead, that cash is lining the pockets of the owner or shareholders.

When you’re a freelancer, the profits are yours and yours alone. Sure, there are fees and bills (not to mention the worry during the quiet months), but generally speaking, that money belongs to you.

My Experience As a Freelance Bookkeeper

Although I’ve evolved and officially am a small business with part-time employees, freelancing allowed me the time and freedom to enrich my life, the economy, and my business.

I’ve been able to work and build my business while also looking after my grandchildren- an opportunity I wouldn’t have been afforded as an employee. I’ve been able to spend time with my considerable family and be an active member of my church.

By hiring other freelancers- from a copywriter to a graphic designer to an IT expert- I’ve not only fed into the economy and industry, but I’ve also helped build the businesses of those freelancers.

Being my own boss has also allowed me to follow my passion for empowering small business owners by teaching them to do their own bookkeeping in my workshops and one-on-one classes.

In conclusion, freelancing is not for the faint-hearted. It takes guts and bravery but also passion and drive. You may find yourself working harder than ever, but if you love what you do, it’s worth every drop of blood, sweat, and tears.

Since freelancing is such a hot topic at the moment, we’ve decided to make this a series.

If you haven’t yet had a chance to check out the first blog in this series, where I give you a glimpse into the challenges of working for yourself, I suggest you catch up before our next edition.

Lastly, and most importantly, I’ll be giving you the lowdown on bookkeeping and compliance tips for freelancers.

At Sudoku Bookkeeping we're passionate about helping business owners with their bookkeeping and accounting software. We hope you find something useful here to help support your business!